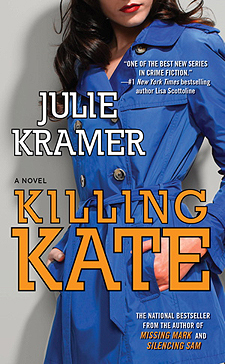 Not all angels are divine...

As TV reporter Riley Spartz discovers a serial killer drawing angel-shaped chalk outlines around the bodies of his victims, she unearths an eerie legend dating back nearly a century. Tracking the story to an Iowa cemetery, Riley finds an infamous Black Angel monument that may be connected to the string of homicides throughout the Midwest. Now she is up against a delusional young man who believes the statue is urging him to kill.

The local police are convinced the killer has left their territory and Riley's boss is convinced viewers are tired of hearing about so much crime, but a personal connection with the latest victim, Kate Warner, makes Riley determined to solve the case.

Riley also gets the scoop on a dog left locked in a hot car. Her pet-loving news director is crazy about this story, but the dog owner goes crazy, too. Is he now stalking Riley? Or has the angel-killer put Channel 3's top investigator on his hit list? Yearning for love and ratings, it's unsure whether Riley will find either before the killer finds her.

When she meets a mysterious stranger, Riley must decide whether he is her guardian angel or an angel of death. The answer doesn't come until a graveyard confrontation where God is the only witness.


"The fourth Riley Spartz mystery by Minnesota author Julie Kramer is her best yet...The writing is so crisp, it will keep readers turning the pages. TV reporter-investigative journalist Spartz is at her feistiest, the dialogue is at its sharpest and the main plot is chillingly suspenseful. There's plenty of action and a jaw-dropping penultimate scene that sets up the potential for another book in the series."
—Associated Press

"This is the best book yet in the Riley Spartz series; it's also the darkest. Kramer skillfully weaves several stories together in this fourth outing, with chapters from the serial killer's POV interspersed with Riley's first-person narration of events. The technique is so effective, you'll want to warn Riley that the killer is nearby! As usual, there's a nice amount of Midwestern lore and delicious insidery info about the TV news biz."
—RT Book Reviews, 4-1/2 stars

"A read full of superstition, shrouded in mysterious myths that only Kramer can write, creating not only believability in her characters, but making the reader question the validity or existence of guardian angels as well. This is a well-written, very enjoyable novel that Kramer's readers have come to expect."
—Suspense Magazine

"Kramer tells the tale from both Riley's and the killer's points of view, and this strategy, combined with short chapters and some clever plot twists, keeps the pages turning. Along with the main mystery, Kramer gives readers a strong sense of a reporter's working routine, drawing in details of other news stories and of Riley's personal life to add texture to the novel."
—Booklist

"Kramer does a nice job of weaving into her mystery the realities of television journalism today, including downsizing, the lack of resources and fast, short-term reporting. But Riley gets the job done in this widely praised series."
—St. Paul Pioneer Press

"With her newest book, Julie Kramer's reputation and following ought to soar. This wonderfully sardonic look at murder through the eyes of TV journalist Riley Spartz is not only surprisingly poignant, but is a flat-out tour de force of harrowing twists and turns."
—New York Times bestselling author William Kent Krueger

"Julie Kramer's Killing Kate offers everything a novel should—a most engaging protagonist, page-turning thrills, plot twists, and a host of characters that jump off the page. I loved it!"
—New York Times bestselling author Heather Graham

"Julie Kramer has one of the best new series in crime fiction....You'll be turning the pages all night."
—New York Times bestselling author Lisa Scottoline

"It's her character's not-so-subtle cynicism about the priorities of contemporary TV journalism that is most revealing: her heroine is always pursuing the sort of grisly stories her fluff-chasing, ratings obsessed bosses would rather gloss over."
—Minnesota Monthly

"This is the perfect read if you enjoy a little spine-tingling action....Kramer has been acclaimed for her past titles, and with good reason. The action is nonstop, and her use of unusual legends, conditions and settings for those climatic scenes gives these stories that spark of originality. Her twists always take you in a direction that you had not anticipated, which is just what you want from a good mystery."
—Minneapolis Books Examiner