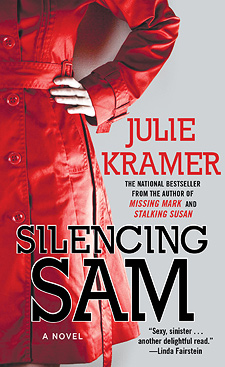 
"Silencing Sam has a sexy protagonist, a sinister plot, and delivers another delightful read in this smart series."
—Linda Fairstein

In this town, gossip kills...

When a widely despised gossip columnist is found shot to death, TV reporter Riley Spartz must secretly investigate a case in which she becomes the prime suspect. Amid murder, our heroine discovers news and gossip have more in common than she ever imagined.

Trouble begins when Riley publicly clashes with newspaper gossip writer Sam Pierce, throwing a drink in his face, after he implies in his 'Piercing Eyes' column that she cheated on her dead husband. When clues to the rumormonger's homicide lead to her, Riley is charged with the crime. The police seem unwilling to look any further for perpetrators though numerous local news makers have reason for revenge - even motive for murder.

Meanwhile, competition between journalists increases with newsrooms facing financial meltdowns. While Riley struggles to interest her boss in a story about rural wind farm bombings and dead bats, a new Channel 3 reporter spikes the station ratings with exclusive stories about the headless homicide of an unknown woman whose decapitated body is found in a city park.

Riley must fight to stay out of jail, ahead in the ratings, and even alive in a killer showdown not fit for television audiences.


"This brisk mystery, in which homicide is leavened with deadpan humor, makes a worthy entry in a winning series."
—Booklist

"Julie Kramer engrosses readers with an action packed thriller that will keep them on the edge of their seats. She brilliantly layers multiple story lines that converge in an ultimate no holds barred confrontation. Riley Spartz makes an intriguing do or die heroine who does not know the meaning of surrender... My interest was captured at the beginning with a slightly veiled threat, remained attuned during escalating news stories, and peaked with an astonishing ending."
—Fresh Fiction

"Silencing Sam has a sexy protagonist, a sinister plot, and delivers another delightful read in this smart series."
—Linda Fairstein

"Julie Kramer combines real life experience with just the right amount of humor layered on a great plot to deliver a book that is grade A steak in a world that loves to give us cheap burgers."
—Crimespree Magazine

"Julie Kramer has created in Riley a fantastic character who is just flawed enough that we can love her. And in this third go-round, we love her even more."
—Blogcritics (read the full review)

"Kramer writes journalism novels with as much insight about the craft as any I have read, and I have read hundreds....At its foundation the book is a journalism procedural, a choice that distinguishes it from the bulk of mysteries published so far in the 21st century."
—Minneapolis Star Tribune (read the full review)

A- Rating: "This series never ceases to amaze me, with the insider view of the media...It's hard to believe this is only the third book in this very relevant series."
—Deadly Pleasures magazine