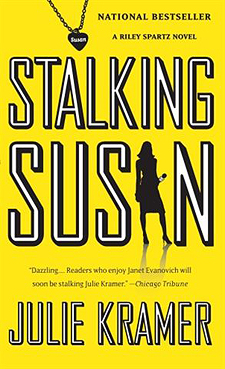 Q & A for book clubs

Inside the desperate world of TV ratings, an investigative reporter discovers that a serial killer is targeting women named Susan and killing one on the same day each year.

Television reporter Riley Spartz is recovering from a heart-breaking, headline-making catastrophe of her own when a longtime police source drops two old homicide files in her lap in the back of a dark movie theater. Both cold cases involve women named Susan strangled on the same day, one year apart. Last seen alive in one of Minneapolis's poorest neighborhoods, their bodies are each dumped in one of the city's wealthiest areas. Riley senses a pattern between those murders and others pulled from a computer database of old death records. Now the deadly anniversary is approaching.

But not just lives are at stake—so are careers.

November is television sweeps month, and every rating point counts. Riley must go up against a news director who cares more about dead dogs than dead women, a politician who fears negative stories about serial killers will hurt the city's convention business, and the very real possibility that her source knows more about the murders than he is letting on.

When Riley suspects the killer has moved personal items from one victim to the next as part of an elaborate ritual, she stages a bold on-air stunt to draw him out and uncovers a motive that will leave readers breathless.


"Kramer's impressive debut, a thriller, introduces Riley Spartz, a Twin Cities investigative TV journalist. Riley's favorite source, a former Minneapolis homicide detective, suspects a serial killer is behind two cold murder cases of women named Susan strangled on November 19 one year apart. Still grieving for her late patrolman husband, Riley relishes the distraction of a possible hot story. After discovering that a raincoat links the two victims, one a 26-year-old waitress, the other a teen prostitute, Riley unearths other cases that may fit the pattern, including the apparently solved murder of a former Miss Duluth and the suspicious suicide of a terminally ill woman. Kramer, a freelance television producer, delivers more than another ho-hum remix of a 48 Hours episode thanks to a snappy subplot—Riley's exposure of a bad veterinarian doing scam pet cremations. Readers will look forward to seeing a lot more of the appealing Riley, who cares about justice as much as snagging at least a 40 audience share."
—Publishers Weekly, Starred Review

"This solidly constructed story builds to a flashy finish as Riley tracks the deaths of a bevy of Susans, then figures out what links them to their killer. A cast of quirky supporting characters, especially Riley's competitive but seemingly incompetent co-workers, add an entertaining comic element. Riley Spartz is a classic spunky investigator. She'll have readers cheering for her gutsy determination to stop the killings and boost her ratings."
—USA Today

"Watch out, ladies named Sue. There's a serial killer on the loose, and your name is on his list."
—The Chicago Tribune (hot summer read!)

"This is a fast-paced and nicely characterized debut that will appeal to fans of Linda Fairstein and Laura Lippman."
—Library Journal

"Great characters and a well-constructed, chilling plot make this a thoroughly satisfying novel. Riley is a character you will love, and this page-turner is difficult to put down. It ranks as one of the best debut novels I've encountered."
—Romantic Times Top Pick

"[a] lively and fast-paced debut...Kramer writes with heart and pizzazz...Kramer's past as a TV producer lends authority to an entertaining story."
—Kirkus Reviews

"It's hard to believe that STALKING SUSAN is Kramer's first novel. Her confident, witty writing style is as fluid as it is flawless—from developing the complex back story and the cast of offbeat characters to creating a sense of authenticity relating to life in the world of television news, Kramer's narrative sensibilities are spot-on throughout.
Readers who enjoy novels by authors like Janet Evanovich will soon be stalking Julie Kramer—on the bookstore shelves, that is."
—The Chicago Tribune (read the full review here)

"She spins a good story with a gutsy and appealing protagonist...This is a series worth joining at the start."
—Booklist

"Debut author Julie Kramer is off to a running start with STALKING SUSAN. After working in the news business for years she has turned that experience towards fiction and I, for one, am damn glad she has...STALKING SUSAN is fast, edgy, and even nerve wracking with its pacing. Add another author to the must read list."
—Crimespree Magazine

"For decades, when asked, I have answered that perhaps, the best journalism novel featuring an investigative reporter is The Fly on the Wall by Tony Hillerman. Published in 1971, it obviously contains nothing about digital databases, computer-assisted reporting, e-mail, blogs or other modern marvels.
Now, a worthy contemporary successor has arrived—a novel by Julie Kramer...most impressive of all is how real-life journalist Kramer conveys the investigative culture and specific techniques throughout the book. It is bound to educate non-journalist readers about the difficult, vital craft."
—Steve Weinberg of The IRE Journal

S "STALKING SUSAN is a fantastic debut. Julie Kramer has crafted a thriller that will get your heart racing."
—Vince Flynn, PROTECT AND DEFEND

"Julie Kramer knows both the TV newsroom and the art of telling a rocking good story. STALKING SUSAN is chilling, twisty, and clever."
—Kathy Reichs, BONES TO ASHES

"Tough, edgy, with sharply drawn characters from the world of television news. STALKING SUSAN grips you with its fast, compelling action, mystery and, not least, its intriguing heroine."
—John Sandford, PHANTOM PREY

"Julie Kramer has written a serial killer novel I found too scary to read after dark, too poignant to read without crying, and too gripping to put down. I was also glad my name isn't Susan. A dashing debut with wit, pace, depth of character and a fascinating look inside the world of television news."
—Harley Jane Kozak, DEAD EX

"STALKING SUSAN is a stalkingly good mystery. Julie Kramer uses her insider knowledge of broadcast journalism to arrest her readers and lock them up in a great story."
—Steve Thayer, THE WEATHERMAN

"What a great debut! Kramer, a freelance news producer, combines years of experience in the industry with great storytelling ability to create what could be one of this summer's best mysteries. Riley is a sassy and quick-witted heroine that readers will adore."
—BookBitch